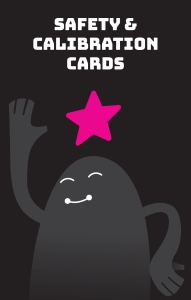 Roleplaying is improvised, and sometimes a game can go in an unexpected direction, or explore difficult subjects. Fortunately, there are lots of content calibration tools that help players communicate their boundaries so they can continue to play in a way that’s still fun for everyone.

In 2017, Dale Horstman and I collaborated to create a flier for Big Bad Con that summarized many of the tools they recommend to their GMs and attendees. You can read more about the con’s recommended safety techniques, and download a free PDF of our flier, on their website.

Dale and I expanded and reformatted the tools in 2018 to be a deck of cards for the “Baba Yaga’s Gift Box” backer level of Big Bad Con’s 2018 Kickstarter campaign.

We expanded the card set again in 2019, and it is now available for purchase (or a free PDF download) on DriveThruRPG! Proceeds from deck sales will be donated to the charity of our choice, as determined when sales pay out from DTRPG quarterly.

Not all techniques are appropriate for every style of play—some are better suited at the table than for live-action, and others may not be a good match for a given game. Some games may also have similar techniques already built in. As a facilitator, take some time to think about which tools would work best for your story. If playing a GM-less game, have a group discussion on which technique people prefer. You may only need just one, or you may want to combine a few.

It’s important to model and practice any tools you’re using before the game starts, so everyone is comfortable using them. Also, discuss as a group what might happen in this particular game that could prompt someone to need to use one of these tools. These techniques will only be successful if the group trusts each other and is committed to having healthy interactions.

Once a technique has been agreed upon by the group, it can be used by anyone, at any time, no questions asked. The appropriate response to someone stating their boundaries is “Thank you.”

Often used in larping, players can say the following or make appropriate hand gestures at any time in the game:

Cut, Brake and related other safeword tools were developed by the Nordic larp community. For more information, see “Safewords” on the Nordic Larp Wiki and Notes on Kutt, Brems and Emotional Safety.

Mostly used by larpers more than tabletop gamers, players can make a fist with one hand and rest it on the top of their head to talk out of character. A variation on this is to hold a fist to your forehead or the side of your head, or to raise two crossed fingers to your head instead.

This technique was developed by the US larp community.

Lines and Veils were developed by Ron Edwards. For more information, see What do the terms “lines” and “veils” mean?

While larping, a player can shield their eyes with one hand to move in and out of the game space or disengage from a scene without disruption. This is a signal that, as a player, you need to leave, even if your character would have stayed. This tool is helpful in large games with simultaneous discussions.

When the need arises to talk out-of-character, particularly to negotiate boundaries within a scene, players can preface their statement with “Off-game,” as in “Off-game, is it okay if my character gives you a hug?”

This tool was developed by Maury Brown, Johanna Koljonen, and the US/Nordic larp communities.

Used primarily in larping, a player can hold an “okay” sign to their chest to ask another player how they’re feeling. The player should give one of the following responses:

If the player repeats the “OK” gesture back, this could mean the same as a thumbs up, but you may want to repeat the check-in again to make sure.

Any other response (such as a wavy hand) or no response should be treated as a thumbs down.

At any time, for any reason, a player can leave the game without judgement or discussion. This might be to check your phone, to get some water, or simply because this game isn’t for you. If it’s the latter, it’s helpful to let the facilitator know you’re not returning, so nobody is concerned about where you went.

The Open Door technique was developed by Eirik Fatland and the Nordic larp community. For more information, see A Primer on Safety in Roleplaying Games.

Write the words listed below on cards and place them on the table where everyone can reach them. At any point during the game, anyone can tap or hold up the card (or just say the words on the cards) to do the following:

Draw a flower with a red center, a middle ring of yellow petals, and an outer ring of green petals. Place this in the center of the table where everyone can read it. During a scene, tap a petal to indicate if you want the other players to push harder (green), maintain the current intensity (yellow), or de-escalate the scene (red). Sometimes this is also referred to as a Consent Flower.

Draw an “X” on a card and place it on the table where everyone can reach it. Anyone can tap or hold up the X-Card mid-game, and the group will edit out any of the scene’s content.

Alternatively, players may make an “X” shape with their fingers and arms. Players in live-action games may also use this method.

For further reading and resources about content calibration in games, check out the following:

Creating a Culture of Trust through Safety and Calibration Larp Mechanics

Safety and Calibration Design Tools and Their Uses

We Are Not Therapists: Gaming and Trauma